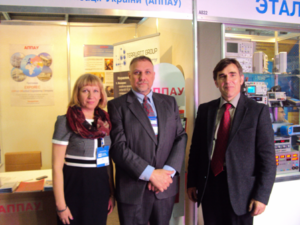 I just returned to America from my third trip to Ukraine since the Russian invasion of 2014. Unlike my previous missions as an International Election Observer, this trip was mostly to participate in “ELCOM Ukraine”; which is Ukraine’s largest annual trade show for Electrical Engineering and Industrial Automation; my professional specialty.
The 20th annual Elcom, held in April 2016, at KyivExpoPlaza, was organized by “fairtrade” from Germany, and their Ukrainian partner, “Euroindex”. The 190 exhibitors, (from 10 countries), is up from 148 in 2015.

Market leaders presented their solutions in the fields of electrical power generation and distribution; automation and control systems; modern lighting technologies; and energy efficiency and conservation. (www.elcom-ukraine.com)
Germany and Turkey had their own national pavilions with about a dozen companies each; also well represented were Poland’s companies; plus a handful from China, S. Korea, Austria, Israel, the Czech Republic; and a few from Russia. There were several dozen Ukrainian companies that ran the gamut from independent manufacturers of equipment; all the way to authorized
distributors of world famous brands like Siemens and Schneider (the market leaders in Ukraine); as well as ABB, Rockwell, WAGO, and Phoenix Contact (from the USA). Although America’s long time motto has been “the business of America is business itself”, there were no “purely American” exhibitors registered. At lease one Ukrainian company showed me a newly patented product (“automated LED safety lighting”) that they need help to market internationally.

Ukraine imported 6.5 billion Euros worth of similar technology in 2012; declining to 3.9 billion in 2014. The business climate has stabilized since the shock of 2014 when ELCOM was almost cancelled. There is cautious optimism the market will improve soon due to international funding for infrastructure improvements worth billions of dollars. Another positive factor is the
association and free trade agreement between Ukraine and the EU.

I look forward to attending ELCOM-Ukraine-2017 next year, and welcome cooperation with American and Canadian companies seeking to develop the Ukrainian market for their products and services.